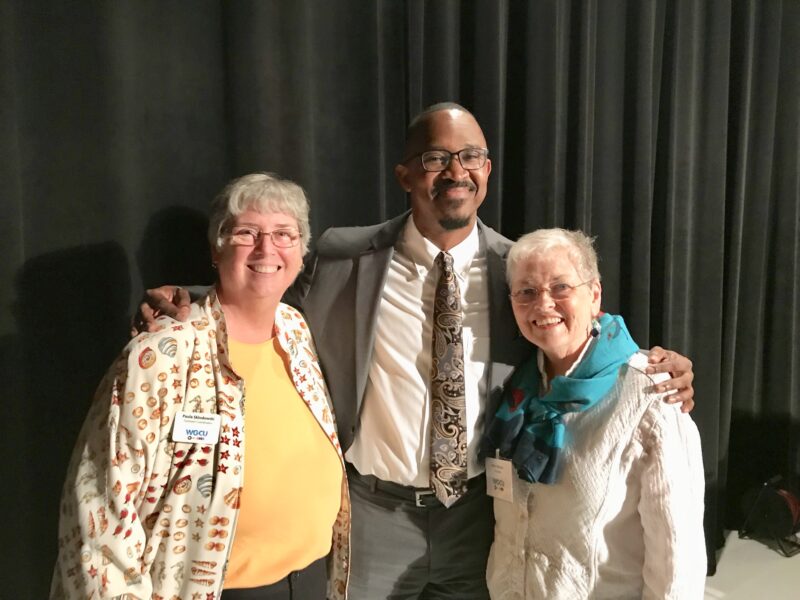 April is Volunteer Month, and a great time to thank WGCU’s amazing team of volunteers, who are essential to everything we do.
They are dedicated people like Gerry Nichols of Naples, shown in the photo with Outreach Coordinator Paula Sklodowski and Joshua Johnson of NPR’s ‘1A,’ during Johnson’s visit to WGCU in February.
Meeting Johnson was just one of the highlights she has experienced as a public media volunteer, which began even before she moved to Naples from Minneapolis in 2002.
Nichols volunteered at Twin Cities PBS, the home station of Garrison Keillor’s “Prairie Home Companion.” She said the radio show host used to visit the station often when she was volunteering, and she often went to tapings of the show.
A friend she volunteered with in Minneapolis just visited her here, Nichols said, and they remembered answering phones together during pledge drives. “We were laughing about doing that,” she said. “I know we were doing it for the station, but they sure had good food! And between calls, we were always coming up with business ideas.”
Nichols was having a hard time adjusting to her move to Florida, she said, until she searched on the radio and found WGCU. “I thought, now I can get my bearings. And it’s been that way ever since.”
She may have ventured far from her Midwestern roots, but the people she met volunteering have made her feel at home.
One was a complete surprise. Some years ago while volunteering at a WGCU event at Tin City, Naples, Nichols came face to face with a very familiar one. “I’m going, What? What? It’s Jim Hale! He was my boss in Minneapolis!”
Hale is vice chairman of the WGCU Public Media Board of Directors and a longtime supporter of the station.
It’s easy to see why Nichols said that volunteering for WGCU “has been a grounding thing.”