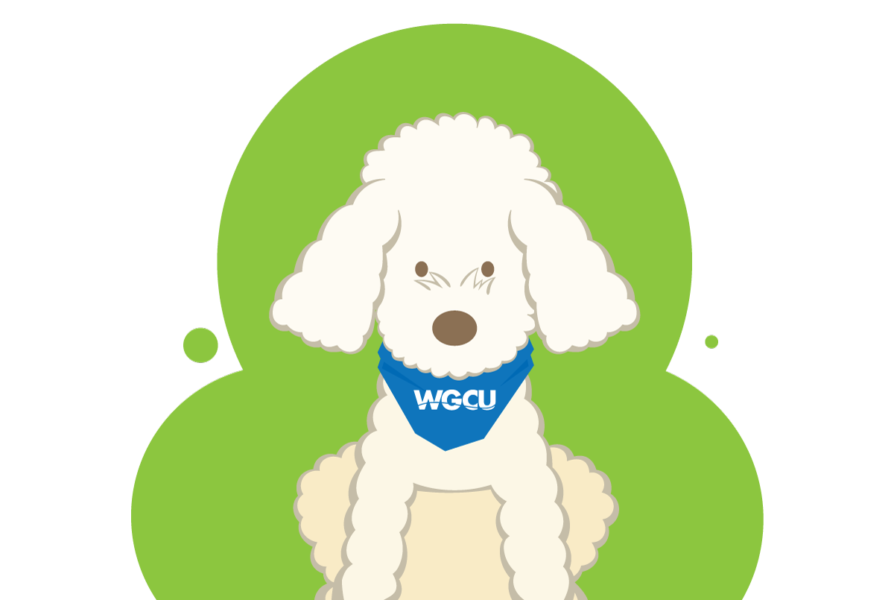 Waldo visited WGCU recently from his home at Beachwalk in North Naples and sat for a photo shoot. He’s 15 pounds of chicken jerky-loving, brown-eyed, brown-nosed, white curly fluffiness. He’s a poodle, and any pup from the ’doodle world is one of the pack in his eyes (no matter how big or small).

Waldo is a very big fan of public media who enjoys watching Mommy’s favorite shows, “Father Brown” and “Death in Paradise,” for two. And he is showing his public media pedigree by issuing this matching challenge, agreeing to go paw-to-paw with donors up to $25,000 by the end of May. Between bites of jerky and camera snaps, we asked him what his favorite PBS and NPR shows are. We think he said:

Poldark: He calls it Polbark, but we get it. Even though his female friends drool over that main guy, Waldo thinks the damsel Demelza is the most fetching character in the cast. That red curly hair!

The Cat in the Hat: He’s not the biggest fan of cats, but the hat’s okay (and the only type of garment Waldo himself will wear…for about 15 seconds).

Curious George: Curious George Dog Counter and Charkie Goes To School are his favorite episodes. He thinks George is one funny monkey.

Finding Your Roots: He thinks he could show Henry Louis Gates, Jr. a thing or two about digging.

Keeping Up Appearances: An oldie but a favorite. He understands the sentiment. It’s why he goes to the groomer’s often and without complaint.

The Splendid Table: Oh, for just a sample! He appreciates the fish tacos he gets to try when out to dinner with Mommy but longs to cultivate a more sophisticated palate. He still has plenty of teeth for an 11-year-old.

Marketplace: His money-management skills speak for themselves when you consider his $25,000 donation. Listening to this show should be a part of all dogs’ training.