WGCU launches Move to Include with storytelling workshop 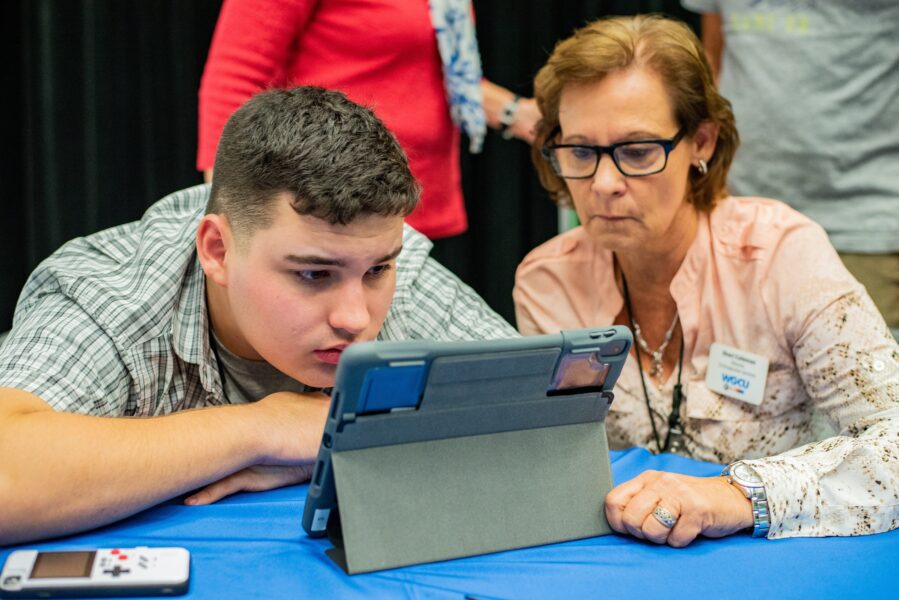 (FORT MYERS, FLORIDA) – WGCU Public Media teamed up with Best Buddies of Southwest Florida the first weekend in November for a digital storytelling workshop that launched WGCU’s Move to Include initiative, which is ongoing and anticipates the 30th anniversary of the Americans with Disabilities Act in July 2020.

The ADA is the civil rights law that prohibits discrimination against individuals with disabilities in all areas of public life, including jobs, schools, transportation, and all public and private places that are open to the general public.

Move to Include is a pilot project led by public media station WXXI in Rochester, N.Y. It began in 2014, and was made possible with the support of the Golisano Foundation and Tom Golisano – who also donated $20 million to build Southwest Florida’s Golisano Children’s Hospital.

Funded by a $645,000 grant from the Corporation for Public Broadcasting, this project includes multimedia elements developed by WXXI and the Golisano Foundation that combine content production, curation and engagement to encourage dialogue about disability issues.

“People with disabilities make up our single largest minority in this country,” explains WXXI President & CEO Norm Silverstein. “Now we’re proud to pilot Move to Include in five additional communities, using public media’s many platforms to promote equity and inclusion. Through Move to Include, we hope to build more inclusive communities by inspiring and motivating people to embrace different abilities and include all people in every aspect of community life.”

“Public media belongs to everyone, and Move to Include is an important part of our mission to ensure inclusion for people with disabilities,” said Pat Harrison, president and CEO of the Corporation for Public Broadcasting. “CPB is proud to support this effort to replicate through locally owned and operated public media stations, a community-based model that truly works.”

Participating stations in Move to Include, including WGCU, are planning additional events through next summer and beyond that emphasize ability, rather than disability.

“Buddies” with intellectual and developmental disabilities were paired with school-age “Peer Buddies” for the workshop. Five teams of two each created a short video on a topic of their choice, doing the interviewing, filming and editing themselves with the help of a member of the WGCU production crew. They did all of their work on kits consisting of an iPad, a tripod and bracket, headphones and two lavalier microphones.

The teenagers got acquainted Friday evening and learned some basics of film production from Betsy Newman, a documentary filmmaker from South Carolina who has conducted similar workshops for 25 years. They determined the topics of their videos and talked about interview questions.

The young filmmakers came back Saturday and got down to work, shooting B-roll, recording interviews and finally, editing videos.

Late Sunday afternoon, the teams finished editing and screened their works for friends, family and mentors over dinner at the station.

Savannah Louderback, a senior in business management at FGCU, worked with the buddy she has known for two years, Devin Cannon. For their video, Cannon talked about the second annual Friendship Ball that Best Buddies held recently and at which he was crowned king. About his film, he said, “It was so awesome!”

The point of the workshop, said Newman, was to “give kids an opportunity to express themselves, to find their voices, to learn about the experiences of others through the interview process.”

WGCU is one of the five PBS stations to participate in the national pilot project, which officially will kick off in July 2020.

“We are ecstatic over the success of WGCU’s first-ever Move to Include digital storytelling workshop,” said Amy Shumaker, Associate General Manager for Content, who worked on similar programs with Newman in South Carolina. “It is our mission in public media to bring diverse and inclusive voices to all of our broadcast platforms.  By partnering with Best Buddies, we had a group of talented young people with differing abilities eager to learn the fundamentals of visual storytelling from our staff.”

Participating buddies were Cannon, Thomas Browning, Gianna Gaziano-Whalen, Miranda Huber and Will Thibado; peer buddies included Louderback, Rayne Roe and Celine Lobocchiaro, with some help from a couple of the teens’ fathers.

Best Buddies of Southwest Florida Executive Director Melanie Musick and Jennifer Mackler from Ida Baker High School were on hand to help. Mackler has worked with most of the students in the Best Buddies program.

“It can be tough for our students with physical or intellectual disabilities to connect with peers their age, but when we pair them with a buddy, it helps them to develop those skills in a safe way,” Mackler said.